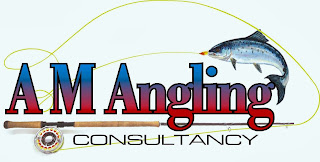 I am pleased to announce that I am now a Sales Rep with AM Angling. AM Angling has been set up since March 2013 and has reached some great heights in its first year of business, most noticeably in its sales of the Zpey brand and their acclaimed rods.
AM Angling has some big brands coming in for the new year so watch this space. If you are a switch rod enthusiast then I guarantee you will not be disappointed in what this shop has to offer. For anglers in Ireland and across the UK the idea of switch rod fishing is taking hold so I hope you pick up a switch rod and give it a go. Myself and Mike are more than happy to have customers trial rod and line combinations before buying and this is part of the ethos at AM Angling.
Check out the store where you can also avail of the latest fly tying products http://www.amangling.com/

And if you have any questions, interest in switch rod fishing or AM Angling than get in touch with me liam@amangling.net
Posted by Switchboy at 09:34 No comments:

Anything concerned with salmon fishing lately is all related to their "ahem" reproductive cycle. I have been out on a few scouts with Petsie and John and we were really surprised at how early the redds were appearing. Were they just going through the motions in anticipation or had the deed been done? It looks like a lot of activity happened in mid to late November on the Rivers Dee and Glyde as a huge amount of redds were present. 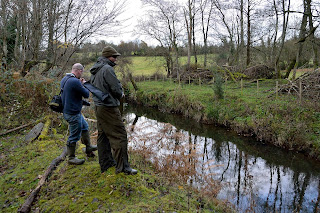 I didn't get any shots of the actual redds, I need to get a polaroid filter for my new lens, its a Nikon 18-200mm and will be my "do all" lens. Looking forward to using it in the new season and I think it is going to be a good addition when I'm outdoors or on the river. Its focal range is very handy and from looking at last years photos its all I am going to need. 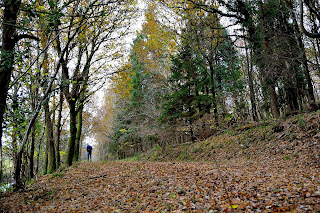 Our local hatchery has started to strip fish of their eggs, I was on hand to take a few snaps. Room was very dark and found it difficult to get nice shots, need a lens for that now and all! 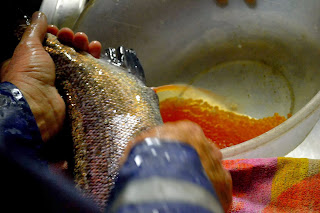 Only starting into the Vice lately. Here are some of my recent flies. 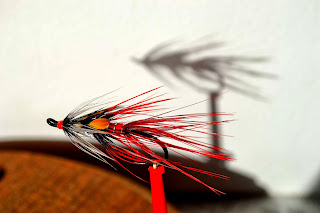 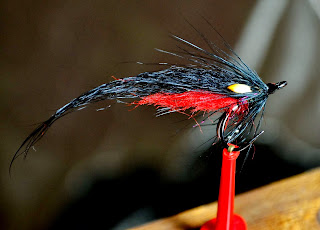 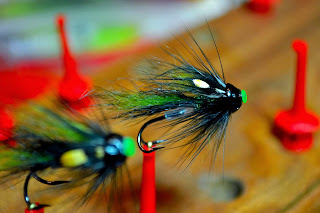 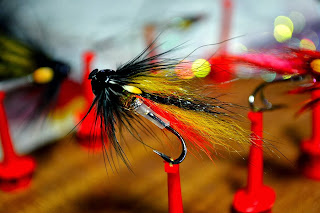 Another park Variant. I'm using the drainer discs from future fly, really like them actually, they fit nice and snug. After watching some recent Henrik Mortensen DVD,s I took some inspiration to tie flies which blend into the background in which you are fishing. The fly should blend in with its environment (to a certain extent) and then appear in front of the fish quickly where it will trigger its instinct and attack it (in theory). Its something I have heard Goran Andersson speak of also who I believe has a great influence on Henrik's outlook. Anyway I like the sound of it and its something I am going to employ for next season.

Picked up some Partridge Patriots but have yet to try them out, they are a far more robust design in my eyes but don't have the finesse of the previous Salars which some traditional tiers might disprove of.
Posted by Switchboy at 09:26 1 comment: