Birthday on the Finn

Myself, Ronan and James were booked into Glemore Lodge for May 18th, which was my 26th Birthday, Ronan's was actually the day before. The water had dropped to below 1ft but fish were around the system, we had the beat to ourselves and Petsie and John joined us also on Saturday. A steady mizzle was persistent through the morning and we knew a rise was on the way, I fished through the graveyard with no luck but fish activity was increasing and that electricity was in the air. I made my way down to the last pool on the Ivy bridge beat above the chapel footbridge, this is a favourite pool of mine for sure, and also a controversial one :). The two runs either side of the Island were in great shape and the water height suited the pool. I was using my 7/8 Lpxe switch with my Watergrip reel and the #9 Switch line with an intermediate tip. Fly choice was a soft hackle cascade on a tube with a tungsten conehead. I fished into the faster water to the right of the Island firstly and at the tail of the pool in a likely seam the line stopped its swing and I gingerly lifted into what I though was a snag, two head shakes later I had my first 2013 fish on and one huge leap later it was off! My strike was poor and I knew the fish was not well hooked, putting this down to early season rustiness! I rang Ronan and told him the news as he was fishing the footbridge. I checked my leader and fly and started fishing through the run again. Around the same spot my swing checked and this time I let loose the loop of line in my hand and lifted heavily. This one was going no where! I got a beautiful sight of the fish as it leaped through the rapids and hugged steadily behind the rock at the top of the pool. A few minutes later and a few snaps from Ronan, I had the fish landed and unhooked and swimming off. 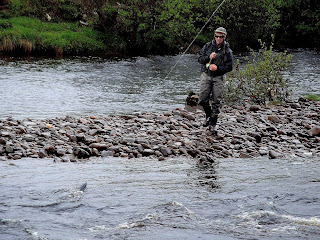 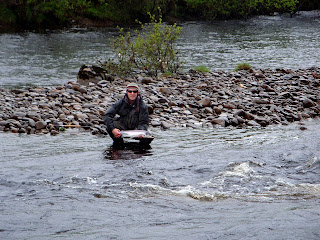 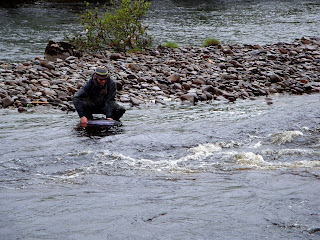 We then made our way back to the Graveyard and fished through it, Petsie missed a nice fish (no thanks to my distraction) and we felt like the day was going to offer a lot. What ensued was a lot of banter on the bank side and when Petie hooked into a Finn springer of 2lbs this added fuel to the fire!

Springer in the net! 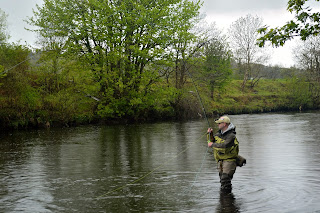 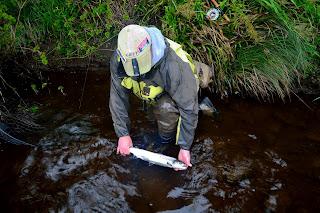 He wouldn't show his face;)

After a few bouts of slagging and general belittlement I decided I wanted to give the runs below the Ivy bridge a go. I took off my switch line and reel and replaced it with my Haze HD 7/9 with a TSL running line, .028" or 25lbs and my DDC shooting head which is an 8/9 double handed head cut back to 21grams. I put on a sink 2/3 tip on this setup, this is one of my favourite line combinations, the sink 2/3 tip presents the fly at a level that I like for faster water. I stuck with the soft hackle cascade as it really looked the part in the water. This setup was really fantastic to use for the streamy runs, distance was not paramount but the head could hit the far bank with ease.

It is funny, I originally cut this head when I first started using the switch Lpxe but then I got into using heavier heads on the rod and went as far as 27 grams on it! The switch line is around 25 grams also, I feel I have come full circle though and I prefer these lighter heads, I think a lot of it has to do with my casting and how it is evolving the more I practice. I still feel I have a bit to go before I am fully happy with how I cast but my stroke has become quicker and the lighter heads suit this more. I also find the setup for a spey cast is so much easier with the lighter line even if it is a sink or sink tip. So for my 7/8 Lpxe I now like a line in and around the 21 gram mark. The switch line is still very useful in tight space and small rivers where I have not got the room for a big spey cast or long overhead cast.

About half way down I swam the fly into a little pocket of slack water and again the line stopped dead. I felt some good hefty headshakes and knew I had something better on this time. I shouted down for some of the lads and they came running (kind of) with a few bottles of Heineken in hand never mind a net! I brought the fish in close to my feet to tail it and Petsie shouted, "Mind that short line!" next thing I knew fly was in the air and all was slack! After a bit more slagging the lads went down to the graveyard and I fished towards them. At this stage John had a fish landed and James lost one on a sunray. The rain was really steady now and falling heavier by the minute. On one of the last runs down I hooked into a lively fish and when landing it noticed the long tailed sea lice on its back, a first for me. 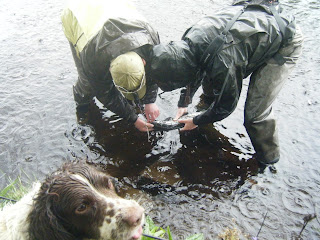 Robert getting in on this one, soaked through, rain was strong and steady. 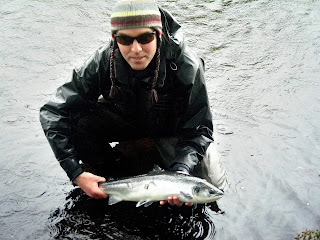 The day came to an end then and we headed back to the lodge for some food. We then made our way to Harkins for some stout. Sim likes to go there and take in the Irish sense of humour which Harkins is a fine example of. Few empty glasses later we were on the road home looking in awe at the 7ft banker coming roaring down the valleys. No fishing in the morning so we kept at the grape and grain (to ill effect). 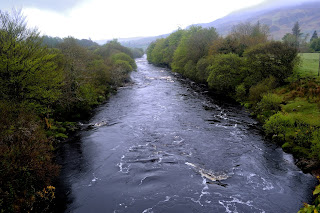 River the next Morning.
We started around 11 and I don't think any of us were in the zone to fish! River was dropping slowly as most of the Reelan water was gone and the Upper Finn was keeping it ticking over. We fished down the graveyard and I used my Le Cie 14'8 with a hover/Inty 9/10 shortcut head and a park shrimp tube on. Big rod for the water but I wanted a bit of use from it before our Scotland trip. It covered the water with ease but still takes some getting used to. I had brief contact with a fish near the tail of the pool and that was about it, I was surprised to hook into anything and really wasn't concentrating, it was a gentle take and another poor strike by me!
Most of the rest of the day was spent trekking around the river to no luck and taking it easy really, we were all a bit dozy from the night before, good lesson to learn for Scotland! 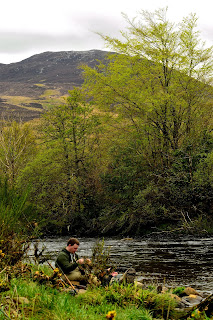 Night before got the better of us. 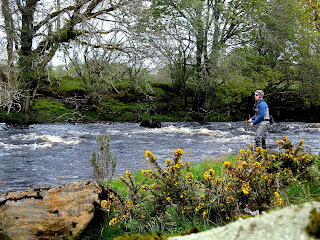 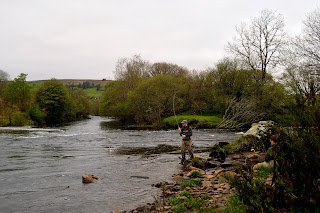 Fishing the meetings
We made our way down to the beat again which ended up being pretty uneventful! I was struggling to put out a good line! I took to taking some shots and videos instead.
﻿
﻿ 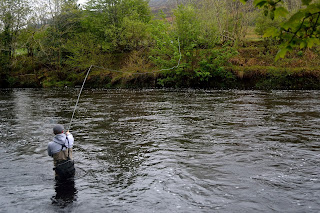 We then met Andrew who completely showed us up going down the beat by hooking 2 and landing one, I good fish around the 9lb mark. He then went on to lose another at the V, plus a fly line if anyone sees it! 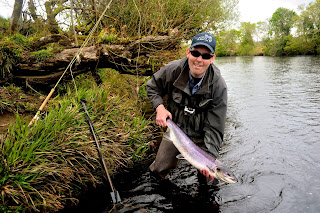 Great weekend, but we were glad to get home that evening! 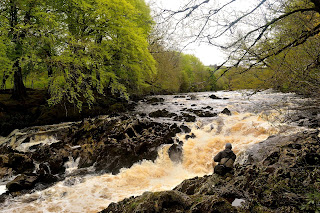 Posted by Switchboy at 07:07 No comments: